Definition:
A disease of newborns marked by fibrous obliteration of the extrahepatic biliary ducts. While the name implies that it is a congenital absence of the ducts, it is actually believed to be a progressive obliteration of the bile ducts near birth or during the first few weeks of life. Jaundice may be present at birth, but usually appears at 1-2 weeks of age. Biliary atresia occurs in 1 in 10,000 to 1 in 20,000 live births with a slight female predominance. There is not believed to to be a racial predilection in the United States.

Prognosis:
Without treatment, biliary atresia leads to cholestasis, and cirrhosis. Death typically occurs before 2 years of age. The prognosis is improved with early operation: Generally the patients undergo a Portoenterostomy (Kasai Procedure) as an infant. The surgery is successful in establishing bile flow in 70% of patients. Those that resolve their jaundice within the first 6 months of life are closely monitored for progression and liver failure. When the liver stops functioning adequately, they are referred for liver transplantation. In the 30% patients who do not resolve their jaundice after Kasai procedure, an early referral for liver transplant is made.

Etiology:
The cause of biliary atresia remains unknown. Several theories exist, including: failure of recanalization of the bile ducts, vascular insufficiency, genetic factors, environmental teratogenesis, perinatal viral infection. The cluster of anomalies seen in polysplenia syndrome supports the hypothesis of defective early embryogenesis. Only one set of twins reported. We have taken care of a set of identical twins (one with, and one without biliary atresia, but both with congenital nephrotic syndrome).

Pathology:
Not true atresia – (not a failure to form). It is believed to be a progressive inflammatory disease. Patients have varying degrees of inflammatory infiltrates, scarring. Ductules are present in first month. Initially liver is enlarged and cholestatic (green with unexcreted bile). Later it becomes hard and shrunken. In contrast to neonatal hepatitis, the liver architecture is initially preserved. The histopathology on needle biopsy may overlap with neonatal hepatitis in 5-10% of cases with periportal fibrosis and bridging microscopically. Cirrhosis is seen later.

Classification by the Japanese Society of Pediatric Surgery:

Who gets workup for Biliary Atresia?

NOTE: The diagnostic evaluation to exclude EVERY possibility could take weeks and should not be done 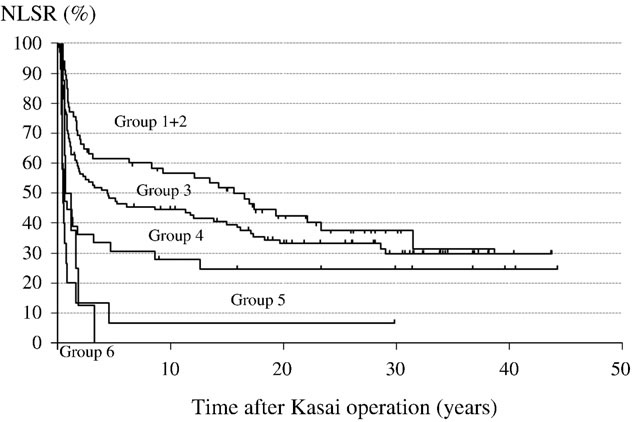 NLSR = Native Liver Survival Rate (without transplant).  The actual survival would be expected to be higher in the current era with successful liver transplant.

Very graphic content related to the type of surgery, organs, procedures or trauma depicted in this tab.×