Central lines are soft plastic or silastic catheters (fine tubes) placed into the large veins of the body that drain directly into the heart. These catheters are used to draw blood drawing and administer medication and nutrition, which could be too irritating to the smaller veins of the arms or the legs.

Some central lines are actually threaded through the smaller veins of the arm or leg and advanced into the larger veins of the chest (so-called PICC lines, or Peripherally Inserted Central Catheters). PICC lines work very well for patients who require an IV for several weeks, but cannot be used as long as other central lines.

All other central lines are introduced directly into the larger veins of the chest cavity, and are usually placed while your child is under anesthesia in the operating room.

The actual port which is implanted is on the left and the Huber needle used to access the port is on the right.  There are several different brands and types made 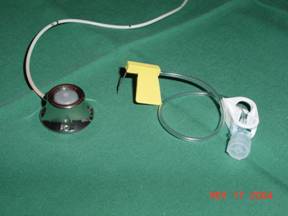 Reasons for using one approach to the vein over another are primarily technical (related to risks specific to the size of your child, his/her risk of bleeding, etc.), but are also affected by whether a vein needs to be used in the future, should another catheter be necessary.

When your child returns from the operating room, there will be a small incision or needle mark either in the neck or underneath the collar bone (clavicle) where the catheter enters the vein. With a Broviac or Hickman catheter, the hub of the catheter will be coming out of a small incision further down the chest wall, with one or two sutures holding it in place until it has a chance to heal. A sterile dressing will be in place to prevent infection from occurring at this exit site.

With a Port-a-Cath, there will be a bump under the skin, which is the flushing chamber, and an incision above or below it. This incision is generally closed with sutures underneath the skin surface, so that no sutures will need to be removed. Steri strips or a biological glue will initially cover this incision for about one week. If your doctor needs to use the catheter immediately, a special type of non-coring needle (“Huber” needle) will be placed through the skin. The first “access” of the port is often done at the time of initial placement while your child is under anesthesia. Future access of the port is done with your child awake. A special cream (EMLA cream) can be applied prior to placing the need to numb the site. A clear, occlusive bandage holds this needle in place and helps prevent infection.

Ports need to be flushed with sterile saline and heparin once a month if not being used.

Risks of the procedure

Bleeding: At the time of placement of the catheter, the surgeon has two primary concerns, particularly when the catheter is placed with the needle method (the technical term is “percutaneous”, or ‘through the skin’, i.e. without an actual incision). One is bleeding from the vein or the artery that is located next to the vein. This is not necessarily a major problem, unless your child’s ability to stop bleeding is impaired, which may happen due to a low platelet count, for example. If the level is extremely low, a platelet transfusion will be necessary before surgery, to minimize the risk of continued bleeding. Sometimes, an excessive risk of bleeding will force the surgeon the place the catheter by making an incision (in the neck or the upper chest) so that all potential bleeding can be controlled directly, and no blood vessels are accidentally punctured or injured.

Pneumothorax: The other concern is a pneumothorax, which is an accumulation of air around the lung that tends to collapse the lung. This happens as a consequence of a needle puncture into the lung, which releases a small amount of air into the chest cavity. It usually requires the placement of a small tube (a chest tube) to evacuate the air and prevent the lung from collapsing. Although this complication is infrequent, a chest X-ray is routinely obtained after percutaneous placement of a central line, to rule out a pneumothorax.

Clotting of the vein: Unfortunately, a clot can develop in a vein when a catheter is in place. This is more common in patients with underlying tendencies to clot, but can happen in any patient with a catheter. There are potential risks of the clot embolizing (breaking free) or the catheter failing to work. Despite a reasonable number of catheter-associated vein clots, we have had no clinically significant catheter-related emboli in the last 10 years. Clotting off of the central vein is more common with long term catheter placement than short term. Treatment involves removing the catheter. Blood thinning after removal is controversial in pediatric patients.

Catheter problems: Cracking, breaking, clotting, dislodgement, clogging of the catheter are all potential problems. Clotted catheters can sometime be de-clotted using a special medicine called tPA. This is done by the IV team (at Phoenix Children’s Hospital), usually in the Emergency department as a outpatient.  Most hospitals do not have the ability to tPA a central line, so don’t expect the average hospital to be able to do this for you.

Malposition: it is possible for the catheter to be placed too deep in the vein, or for it to get pulled out. Rarely, the catheter will move out of the planned vein. This usually requires replacement.

Once the need for the central line is complete, it can usually be removed as an outpatient.The decision for general anesthesia will depend on the type of catheter, maturity and personality of the patient, as well as the patient’s risk of anesthesia.

PICC: lines slide out easily and without any significant pain or discomfort.

Broviac:® or Hickman:® type catheters: the removal is painful, but fairly brief. After injecting local anesthesia at the skin, a small incision is made where the catheter exits through the skin. Traction is held until the imbedded cuff releases. There is a very small risk of catheter breakage during removal. Bleeding after removing the catheter is controlled with direct pressure and the site should be watched carefully for any oozing. An occlusive dressing is often used after removal to decrease bleeding and prevent air from getting into the distant vein. The opening is not stitched close because of concerns for infection. The opening will contract and close on its own within a few days. Sometimes the Dacron cuff is left behind in the fat under the skin during removal. The retained cuff causes very rare problems and it is very acceptable to leave. Most children require general anesthesia and cannot tolerate removal while awake.

Ports: in children are removed in the operating room under general anesthesia. After removal, a Steri-strip is placed over the incision which is left in place. The skin is kept dry for at least 48 hours. The stitches used by our surgeons are dissolvable. The Steri-strip will fall off in a few weeks or can be removed any time after 10 days. No routine follow-up is needed with your surgeon after port removal, but call if any fever or signs of infection (redness, drainage, increasing pain).

Accessing a port:  placing a needle through the skin into the implanted port so that it can be used.
Broviac®:  a catheter that is tunneled under the skin and placed into a large vein for giving medication, nutrition, or drawing blood.  Also called a “Hickman Broviac” or “Hickman.”
Catheter:  Plastic tube with a hollow opening.
Malposition:  having the catheter is a poor location.
Percutaneous:  through the skin.
PICC:  Peripherally-inserted Central Catheter.
Pneumothorax:  Air in the chest between the lung and the inside of the chest wall (abnormal).
Port:  a completely implanted device for giving IV medicines
Steri-Strip:  a sterile tape used in the operating room to re-enforce a skin closure.